Nowadays I’ve been working on policies and triggering a behavior  based on user action, so I wanted to write about it, but I found more interesting stuff I did with it than triggering itself (which is by the way well described by Jeff Potts). I wanted a routine, which runs on every node created and adds a rule, if that node is a folder.

At first I did some research on rules. How are rules bound to nodes? We’re working on repository, so it should be a node. When you open a node browser and look on node with rule bound, you’ll see ‚ruleFolder‘ child of that node of ruleFolder type. Children of this node are rules itself – one child, one rule. Inside each are actions defined with conditions and actions with their parameters, like on following structure:

Parameters are another types of node – actionparameter. Each has two important properties: parameterName and parameterValue and those values depends on action (or condition) on which is this parameter bind to. Example of parameter for copy-to-webproject action is on following image:

And of course third node type – action. With or without parameters. In both cases with properties like definitionName, executeAsynchronously, etc. see following image: 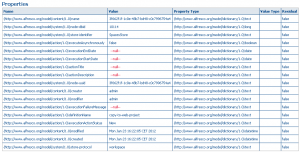 Examples on how to set rule on node are in nodeRef cookbook. I worked with CopyToWebProject action, which can be with parameters defined like this:

Note static variables with parameter names (prefix PARAM_). Executers are in org.alfresco.repo.action.executer package, or it’s possible to use own action executer (extending ActionExecuterAbstractBase).

Next step is to add a condition, in my case HasAspectEvaluator like this:

Created condition and action should be placed in CompositeAction:

And the final step is to add this whole composition inside created rule and use ruleService to bind created rule to node – through its nodeRef:

This is enough and it should work. What am I using it for? I need CopyToWebProject rule to foolow tree structure in DM, not just copy everything in subdirs to given folder. So I have my own implementation of OnCreateNodePolicy, which binds this rule to every created folder (under some conditions of course).

This entry was posted by shmoula on 25.1.2012 at 17:24, and is filed under Programování. Follow any responses to this post through RSS 2.0.You can leave a response or trackback from your own site.